skip to main | skip to sidebar

While I don't like to pay more, a $50.00 per infusion co-pay is unrealistically low. Doubling or tripling the co-pay is no big deal.

American seniors are treated like royalty; and the working folks with children must bear the pain of taxation and much higher health insurance. Virtually every senior I know is living like a king taking cruises, weeks at the beach, dinner at nice places, new cars, and so forth.
Posted by Myeloma Dawg at 9:42 AM No comments:

Lets start with some photographs of our recent vacation to the Finger Lakes of New York. We visited quite a few wineries, probably drank to much. 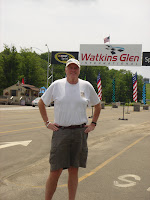 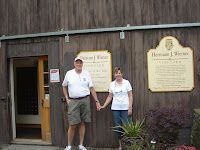 Visited the H/O this past Tuesday. Kappa Light Chains are back in the normal range at 1.93 mg/dl; the upper normal is 1.94 so I am just in. My O/H believes that Kappa Light Chains are a better myeloma marker than the M-Spike. Igg was 1571 mg/dl which is slightly above the upper normal of 1554. With the exception of my WBC, which was a bit below normal, my other blood counts were normal. We have decided to stay off chemo for another 6 weeks; at that time, we will redo my blood work and reassess my cancer burden. On June 27, I had my 25th Zometa infusion, this was my 25th, and it had been 3 months since my previous Zometa infusion. At the aforementioned H/O appointment, we decided that we would discontinue Zometa for the time being. The H/O believes that since I am more or less in a stable condition; the risks of bone necrosis out weighed the benefits of increasing bone density.

However, I have had a bout of MRSA in the left elbow. This is my third event. After installing new sprinkler heads in the yard, I woke up with a swollen and painful left elbow. I immediately went to a Walk In Clinic, a culture was drawn and I was put on an antibiotic. However, it turned out this antibiotic was ineffective for MRSA and I had to switch to Doxcycline which is supposed to be effective for MRSA. My swelling has diminished and the pain is gone; however, there are still thick areas under the skin. I have consulted with an orthopedic physician that specializes in MRSA and his recommendation is to watch and wait; If it gets worse, he will see me quickly and open up my elbow and treat it with a new drug that kills MRSA on contact.

Next week I go back to north Georgia for some consulting and then on Thursday we take off to Kansas City for my cousin's 50th wedding anniversary.
Posted by Myeloma Dawg at 8:14 PM No comments: